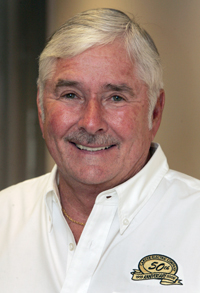 In 1963 Roy Gailey had just joined Carter Electric as an apprentice, but Bill Carter immediately recognized his potential and took special interest in his education. With encouragement from Mr. Carter, Roy graduated from the apprenticeship program in 1966 and received his Journeyman License. This was the first step in what has become a lifelong devotion to the building trades in Central Florida.

In the years that followed, Roy’s promotion to Field Superintendent exposed him to a wide variety of commercial, industrial, healthcare and design/build projects, which have become an integral aspect of our business. Developing relationships and acquiring a reputation for being Carter Electric’s most valuable asset, his abilities and ambitions were rewarded, with advancement through the ranks of the organization.

Working his way up from the bottom, as well as his involvement with numerous professional organizations, has given Roy unique insights into not only all aspects of the electrical trade, but to the welfare of all the parties involved in a project. From the helpers in the field to the developer. The long years of continuous service of all of our employees and the professional relationships that have been established with entrepreneurs, architects, contractors and other trades are testimony to Roy’s appreciation of the interests of all participants.

Shown below are some of the professional organizations, to which Roy has recently brought his expertise.